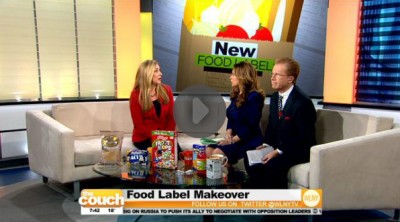 Now that 20 years after its debut, the statutory nutrition label is finally getting a makeover, food labels should be made easy to read and understand, emphasized highly sought after nutrition expert and author Dr Janet Brill on the nationally televised CBS morning news and talk show – “Live From the Couch”.

Discussing this critical issue with radio broadcaster Carolina Bermudez and TV anchors John Elliott, Dr Janet said food labels should clearly state how much teaspoons contain how much calories rather than listing information in grams. It gives a better idea over what you are consuming. The number of calories in a bag should be prominently displayed to help combat the obesity epidemic in the USA, she added.

Having reasonable service sizes, clear measurements about the percentage of whole wheat and front package labeling are other essential information that should be conveyed clearly to the consumer, she stressed.

Watch the “Live From the Couch” video as Dr. Janet speak about the importance of nutrition label makeover and how it is going to be effective in helping people make better food choices.