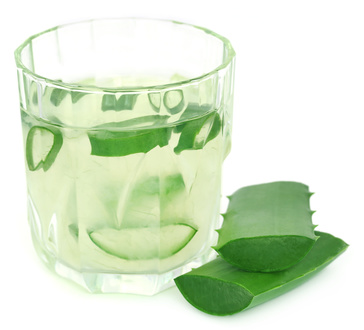 If you’ve ever suffered from a sunburn, you are probably familiar with the age-old herbal salve for sunburns (and minor cuts and burns): the aloe vera plant. But have you tried the new rage—drinking aloe juice? Aloe vera juice is made from the outer parts of the aloe leaf, whereas the central portion of the aloe vera leaf contains the clear gel familiar to most for topical use. The aloe juice contains mostly water and also a nice amount of potassium and vitamin C. The problem is that the taste is a bit unusual for some people’s palate and more importantly, aloe juice is a potent laxative, so drinking it may cause diarrhea after ingestion.

For those taking medications, the potential for drug-nutrient interaction is also a concern that must be checked out with a physician.  Another caveat is the fact that some manufacturers add in sugar, bumping up the calorie count to 130 per cup—a hefty dose for those watching their waistline.